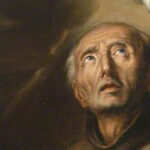 Saint Peter of Alcantara | Saint of the Day for October 24

in: The Saint of the day
9 Views

Peter was a contemporary of well-known 16th-century Spanish saints, including Ignatius of Loyola and John of the Cross. He served as confessor to Saint Teresa of Avila. Church reform was a major issue in Peter’s day, and he directed most of his energies toward that end. His death came one year before the Council of Trent ended.

Born into a noble family—his father was the governor of Alcantara in Spain—Peter studied law at Salamanca University, and at 16 he joined the so-called Observant Franciscans, also known as the discalced friars. While he practiced many penances, he also demonstrated abilities which were soon recognized. He was named the superior of a new house even before his ordination as a priest, was elected provincial at the age of 39, and he was a very successful preacher. Still, he was not above washing dishes and cutting wood for the friars. He did not seek attention; indeed, he preferred solitude.

Peter’s penitential side was evident when it came to food and clothing. It is said that he slept only 90 minutes each night. While others talked about Church reform, Peter’s reform began with himself. His patience was so great that a proverb arose: “To bear such an insult one must have the patience of Peter of Alcantara.”

In 1554, Peter received permission to form a group of Franciscans who followed the Rule of St. Francis with even greater rigor. These friars were known as Alcantarines. Some of the Spanish friars who came to North and South America in the 16th, 17th, and 18th centuries were members of this group. At the end of the 19th century, the Alcantarines were joined with other Observant friars to form the Order of Friars Minor.

As spiritual director to Saint Teresa, Peter encouraged her in promoting the Carmelite reform. His preaching brought many people to religious life, especially to the Secular Franciscan Order, the friars, and the Poor Clares.

Peter of Alcantara was canonized in 1669. His Liturgical Feast Day is September 22.

Poverty was a means and not an end for Peter. The goal was following Christ in ever greater purity of heart. Whatever obstructed that path could be eliminated with no real loss. The philosophy of our consumer age—you are worth what you own—may find Peter of Alcantara’s approach severe. Ultimately, his approach is life-giving while consumerism is deadly.